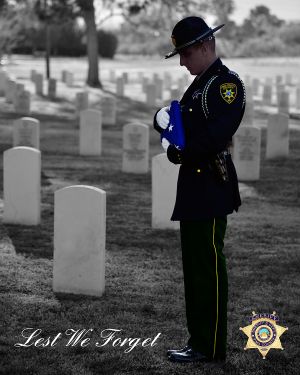 Rustling cattle was, and is, a very profitable crime. To help combat this problem, the County employed rangers.

On December 2, 1914, County Ranger James A. Mercer, accompanied by Robert Fenton (a rancher), went to the small ranch of J. Padilla in an area north of Pantano, Arizona. Ranger Mercer was investigating a report that Mr. Padilla was in possession of a stolen calf. As they approached the ranch, Mr. Padilla began walking towards them and fired his rifle, striking Ranger Mercer in the left leg just above the knee. Ranger Mercer fell to the ground bleeding profusely from the wound, which also resulted in a broken leg bone.

Mr. Padilla fled to a nearby canyon and no record has been found as to whether or not he was ever arrested.

Ranger Mercer was transported to Rogers Hospital in Tucson, where he passed away nine days later from loss of blood. He was 42 years old and was survived by his wife Harriet, two brothers, and three sisters.