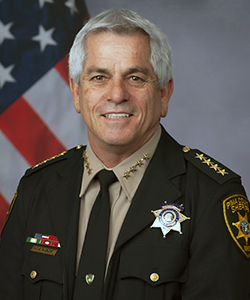 Sheriff Chris Nanos was born and raised in El Paso, Texas.  Before becoming a law enforcement officer he attended the University of Texas - El Paso, majoring in Public Administration/Criminal Justice.  Sheriff Nanos began his career in law enforcement in 1976 with the El Paso Police Department.  He became a member of the Pima County Sheriff's Department in 1984 as a corrections officer and was promoted to deputy the following year, which began the upward trajectory his career would continue to follow. Throughout his career Sheriff Nanos has maintained a strong emphasis on his work in Criminal Investigations, particularly Violent Crimes, Sex Crimes, and Narcotics Interdiction. This dedication to his work has allowed him to move up the ranks within PCSD, previously serving as Chief Deputy and appointed Sheriff.  In 2020, Sheriff Nanos was elected as Sheriff and returned to the department ready to serve the community. He is responsible for a multi-million dollar budget and a department comprised of nearly 1500 highly qualified, trained, and committed employees complemented by over 400 volunteers who provide support throughout the organization.  Sheriff Nanos is supported by his wife of 36 years, Charlene. Chief Deputy Richard Kastigar joined the Pima County Sheriff’s Department in 1977 as a detention officer.  Two years later he was promoted to deputy and although Chief Kastigar had no early aspirations to pursue a law enforcement career, he soon realized the adventures he could experience as a cop. After being promoted to sergeant in the early 1980s, his work brought national and international recognition to Pima County for its volunteer and crime prevention programs.  Chief Kastigar retired as a Bureau Chief in 2013, with distinction and honor.  A short time later, Sheriff Dupnik asked him to return as the Sheriff’s Executive Advisor and Communications Manager, where he continued to serve as a civilian employee until 2017.  Sheriff Chris Nanos appointed him as Chief Deputy on January 1, 2021.  He is now responsible for the entire department’s day-to-day operations and is energized and inspired by the hard-working men and women that make this organization one of the best law enforcement agencies in the nation. Chief Deputy Kastigar and his wife of 41 years, Denise, have 2 daughters living military lives with their respective Army Officer husbands and six grandchildren. Chief Jesus Lopez has had the privilege to serve the community with the Pima County Sheriff’s Department for 33 years. In that time, his various assignments have allowed him to apply strong leadership skills to empower his staff to succeed.  Chief Lopez recognizes the quality of the department is defined by the performance of its most valued asset--the men and women who work here. Chief Joseph Cameron has had an interesting 34-year career with the Pima County Sheriff’s Department. He has spent 29 of these years in patrol. Chief Cameron’s philosophy is mission first with the wants and needs of his staff a close second. Chief Cameron leadership style is “treat others the way that you want to be treated.” Chief Buddy Janes started his career with the Pima County Sheriff’s department as a Corrections Officer in 1999. He was soon promoted to a deputy sheriff and has worked in almost every area of the department including Corrections, Patrol, D.U.I., SWAT, Training, and Administration. He is a graduate of Northwestern University School of Police and Command and Grand Canyon University. PCSD proud since 1999. Currently overseeing the Administrative Division, which includes: Chief Gerard Moretz, a former public school teacher, has spent many of his 23 years with the PCSD contributing to various training endeavors and is now engaged in revitalizing the department’s recruiting and training programs.  Chief Moretz sees the commitment and energy of the department’s members as the most important factors in how we positively impact the community.  In all things, Chief Moretz looks to balance department efforts against what is truly beneficial and relevant to the citizens of Pima County. 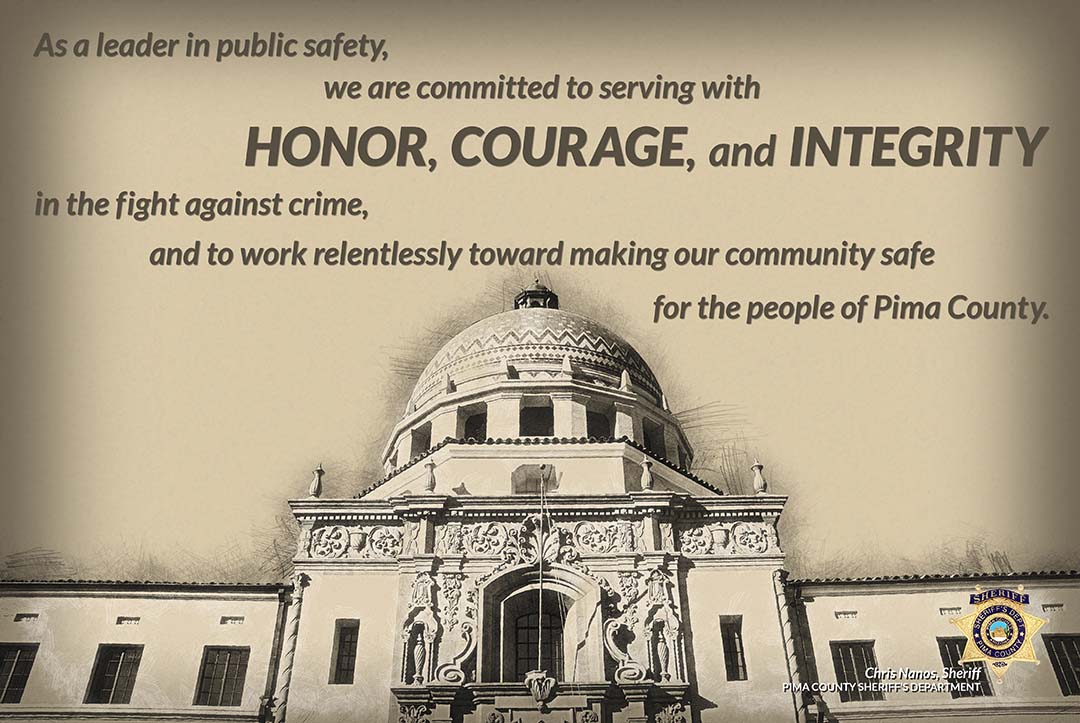